Has Uncle Jerome lost his magic touch?  Or, has the market finally come to grips with the physics of where we are headed.  Higher rates and reduced QE = sideways equities at best, lower at worst.

ES, NQ, and RTY all remain in downward auctions.  They have migrated the 5D VPOC lower, so that now becomes the key point of interest should the auction attempt to head higher.

Crude took the news in stride and is busy trading higher on war fears.  They are once again attempting up to the top of the bracket.

Thursday will be the fallout of FOMC and Tesla earnings.  Apple reporting after the close.

VIX Curve:  “Inverted Curve” / We are fully inverted as of the close.  The curve actually gained inversion by a few points by the close.  Caution remains!!!!

Catalysts: Jobless claims before the open…  AAPL earnings after the close

Keep the Opening Ranges of the year in view!

IDEAS from the QUICKSHEET:

Identifying zones of interest and letting the trade come to you

Market Profile Examples, Profiling Execution, Resources, Video
When making trading decisions, we remove some of the randomness of markets by identifying zones that we are interested in participating. Then, if the auction comes to us,…
Read More →
1 MIN READ 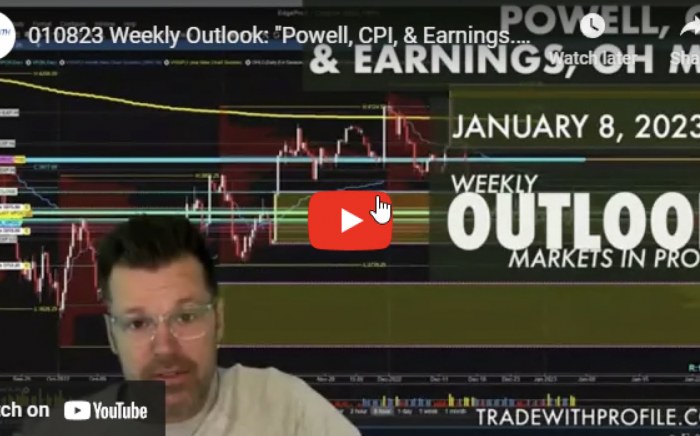 Resources
Take 35 minutes to review this overview of markets and gain some free education as we prepare for the coming week and our team's work in the PATHWAY.…
Read More →
2 MIN READ

[Q&A]: Using the profile to see and find value

Market Profile Examples, Q&A Sessions, Resources, Tips for Newbies, Video, Webinars
Part of our weekly Q&A series. We began the discussion with a look at how to use the profile to see "value" and use that value to help…
Read More →
1 MIN READ
CONNECT WITH US