For Wednesday:  Happy December!  And we may start it off with a bang.  Uncle Jerome had to come clean about inflation Tuesday and sent the market into a tailspin.  We have been saying for a while that the Fed has painted itself in a corner and ignoring inflation will make it worse.  Well, they ripped the band-aid off and we saw what can happen.  AAPL was one of a handful of stocks that didn’t lose ground Tuesday.  As I write this the indexes have bounced considerably off their intra-day lows.  This has been the game of late and it leads to gaps on equities which make it tough to buy them.  We believe the market is not out of the woods yet.  Other than the RUT, the other indices have just scratched the service of a “pullback” (less than 5%).  A healthy pullback (10%) would be welcomed and would set up stocks for a nice run.  So while the market shakes out we will focus on high IV credit spreads.  If you look at the Consolidating and Early Selling columns there are lots of green.  Have a great Wednesday! 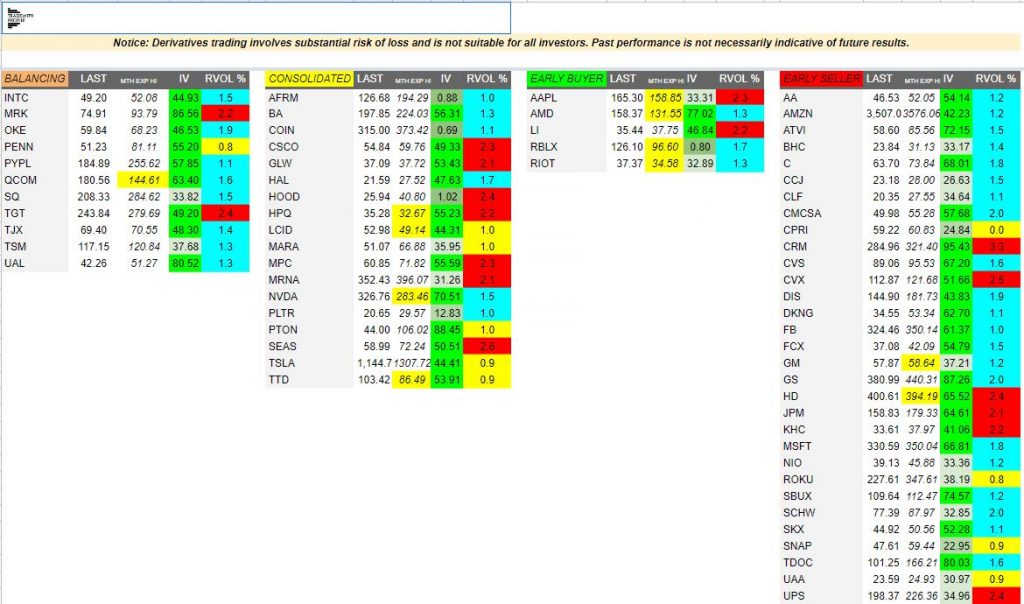 EQUITY QUICKSHEET
For Monday:  After a much anticipated week, stocks are doing what they should do when the FED keeps the foot on the pedal...Rally!  From the rally, we expect…
Read More →
1 MIN READ

EQUITY QUICKSHEET
For Friday:  And that is a wrap on large tech earnings.  AAPL and AMZN took a swing and missed on earnings.  It wasn't pretty. So much so that…
Read More →
1 MIN READ

EQUITY QUICKSHEET
For Monday:  Equities rallied for the third day in a row and now are at a critical point.  We expect some back and fill for a few days. …
Read More →
1 MIN READ
CONNECT WITH US