Some time ago, I had the opportunity to catch up with Dave Toth, Market Insights Senior Analyst with RJO’Brien (Dave has served as a respected technical analyst for over 30 years) during a meeting in Denver. Dave was hosting the meeting to discuss technical analysis.

By definition, technical analysis is the perspective that trading decisions are determined simply through a reading of the charts. If you use things like RSI, MACD, Stochastics, CCI, trendlines, Fibonacci, etc in your reading of charts, then you are applying a form of technical analysis.

At one point in the evening, Dave got on a soapbox (foaming rant) about technical indicators. He described how he wished that we could strike the idea of “overbought” or “oversold” from our vocabulary. He has a good point. The metrics many traders use to describe something as “overbought” or “oversold” are through the use of momentum indicators that they overlay onto a chart. Those indicators are derivatives of price, so their value needs to be kept in context.

The reality is that a trading product can remain “overbought” or “oversold” for much longer than you can remain solvent (if, for example, you are using those conditions to trigger a counter perspective trade).

Years ago I struck “overbought” and “oversold” from my vocabulary. I’d encourage you to do the same.

Instead of thinking about “overbought” or “oversold” think about “acceptance.” “rejection,” and “exhaustion.” These latter concepts focus on how the auction is digesting price and that is very relevant to your trading decisions. When coupled with the profile, they become very powerful indeed.

For example, note the example of S&P futures below…

After a fairly tepid open, a catalyst is introduced into the auction. D and E period see swift and large ranges. No doubt, some “oversold” indicators were getting pegged. Also, without a doubt, some aggressive “dip buyers” were trying to buy the lower prices and either getting stopped out or taking on heavy losses.

Instead of reacting to an “oversold” indicator, a profile-informed trader waits for behavior that indicates sellers are “exhausted” and lower prices are being “rejected”.

This information begins to form in E period when the auction attempts to trade below 3340 and rejects. This forms some buying “excess” that is confirmed in F period (see blue box). In F period when we are unable to trade through the “excess” developed in E period, it’s at this point that the auction will either, begin to “rest” and trade sideways to migrate value lower. Or it will trade back in the direction of prior value (3371) as we see here.

You may think that you would have missed much by waiting until the excess is established in E period by trade in F period before taking action. That’s one way of thinking about it. Another way is to think about it is through the lens of the risk you avoided combined with the increased probability that the selling was abated. After all, trading is a game about mitigating risk!

So, some questions to ask yourself regarding “oversold” or “overbought” perspectives: 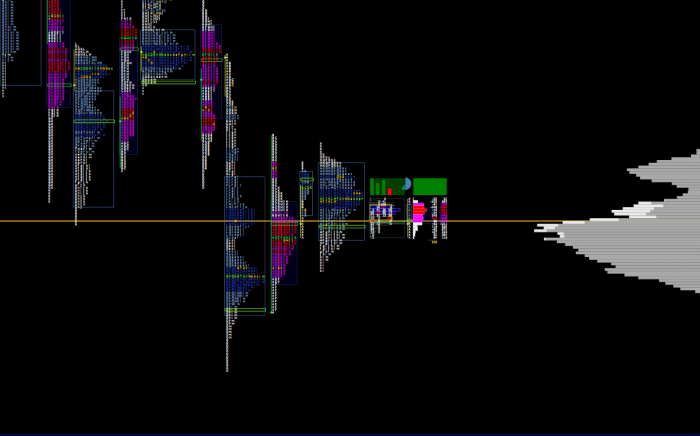 Seminar: How to Get Started with Profiling Tools

Market Profile Examples, Profiling Essentials, Tips for Newbies, Video, Webinars
Maybe you've heard about Market Profiling before, but not sure if it's worth the hype.  In this seminar, we guide you through practical examples of Market Profile in…
Read More →
1 MIN READ

[Q&A]: How to use the profile with short term triggers to minimize risk

Market Profile Examples, Q&A Sessions, Tips for Newbies, Video, Webinars
Part of our weekly Q&A series. We began the discussion with a look at how to use the profile along with short term triggers to minimize risk on entry.…
Read More →
1 MIN READ

[Q&A]: How to use the profile to anticipate the next move

Market Profile Examples, Q&A Sessions, Tips for Newbies, Video, Webinars
Part of our weekly Q&A series. We began the discussion with a look at how to use the profile to anticipate a larger market move. Then we opened…
Read More →
1 MIN READ
CONNECT WITH US